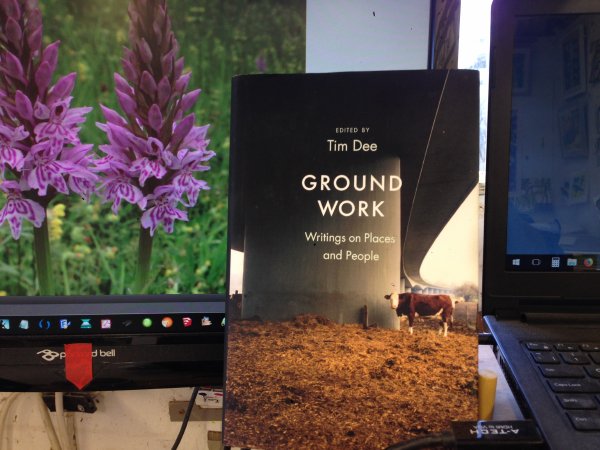 Friend Tim Dee has compiled and introduced a great set of writings based on peoples thoughts/connections to a place they know intimately. He suggested I might write about my micro meadow. I struggled to stammer out some of my learnings/experiences. Amazing to read/see how others flew with the same brief. It was launched last week in hardback and I should have posted sooner…… I’d recommend it.
Meanwhile I’ve been log jammed by the sensory overload of pre-christmas trip to the Kruger, so many high points that I haven’t known where/how to aim the brush. I will start to post some highlights before the onslaught of more local spring fever takes over. 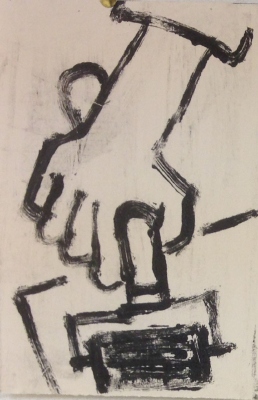 A few days in Pembrokeshire, a break after weeks of framing and domestic exigencies. The highlight watching seals, especially a pup being suckled. 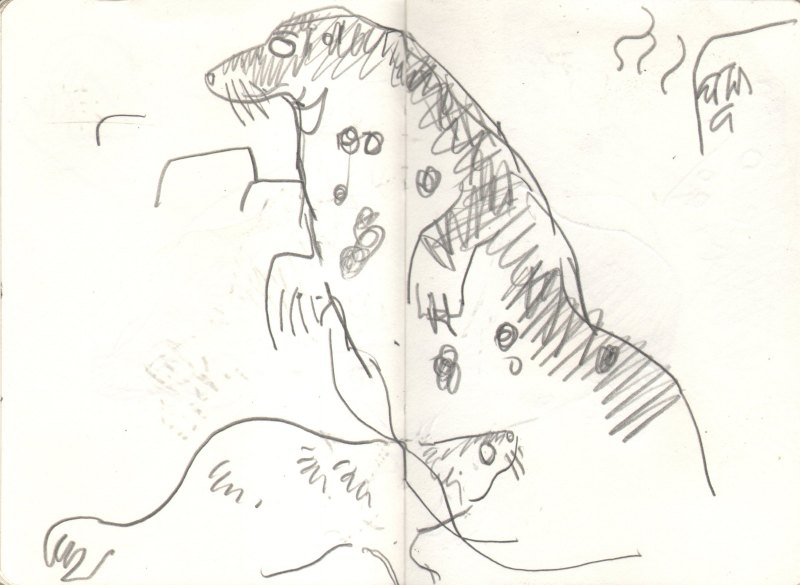 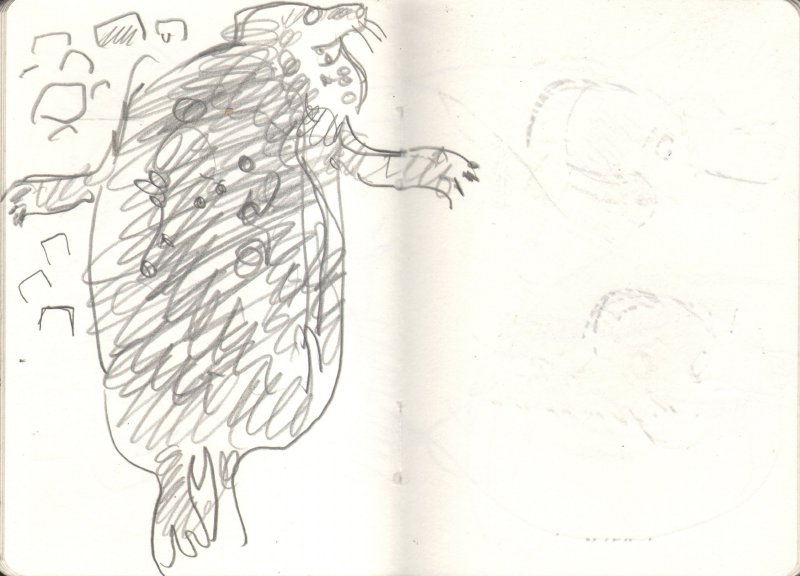 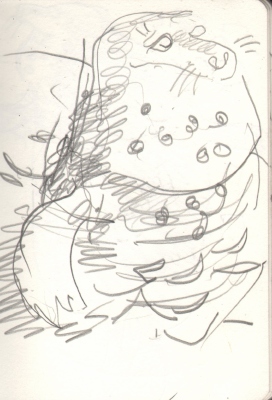 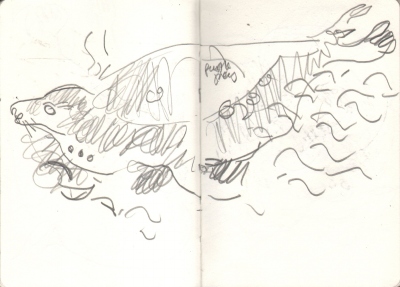 Other than that the sad sight of a dead young common dolphin with a gash in its back that looked boat related. Unusual chance for sketching though, the movements of the sea turning it around… I stopped for a while in tipping rain to learn something from its misfortune. 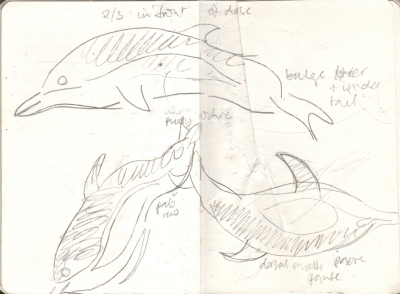 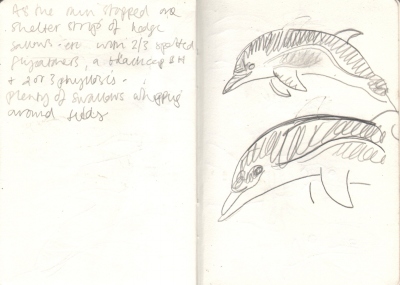 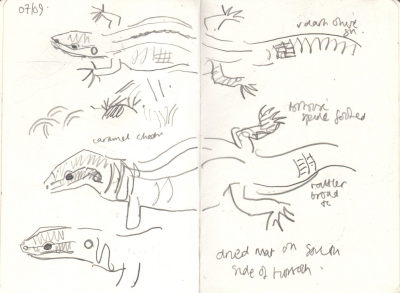 Lovely late season vegetation… the heather all gone over but after glow of orange… purple loosestrife and fleabane. Still lots of red campion in flower and some patches of sea campion too. In a gap between showers 3 spotted flycatchers and a few phylloscopus warblers on a sheltered willowy field fringe.
Insects feeding on ivy flowers including red admirals and painted ladies, a mystery bee with very long antennae… from the book too late to be long horned bee…
Great to be alongside the Ramsey sound with ever changing waters and choughs seeming much more approachable than on the Lleyn where I’ve watched them most. 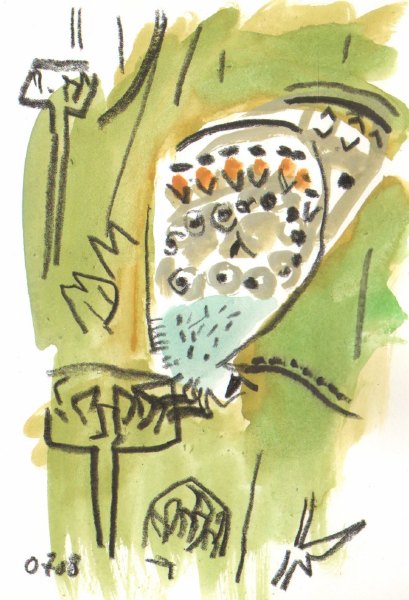 There were only three blues on the meadow, a male and female common along with the brown argus. I decided to give more time to the common blues as my understanding of the ‘benchmark’ species still seemed woolly. Brain struggling to take in the subtleties of form at the same time as retaining the bold pattern…. All those spots and dashes that have a strong dynamism of their own patterned onto the interlocking fanned clam shell wings. As the wings open the hind wing must make some kind of arc to lay back and out… slightly mind bending to accommodate the shifting position of the spots in that process. 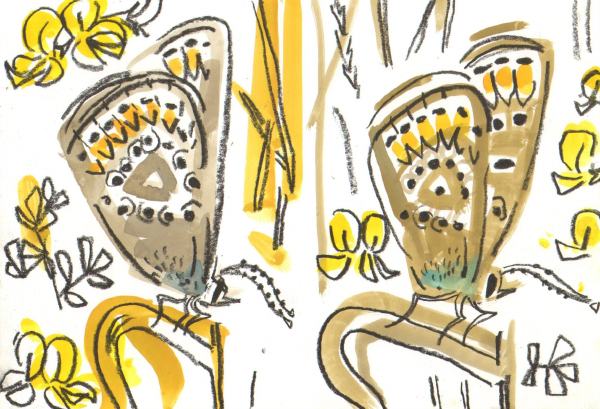 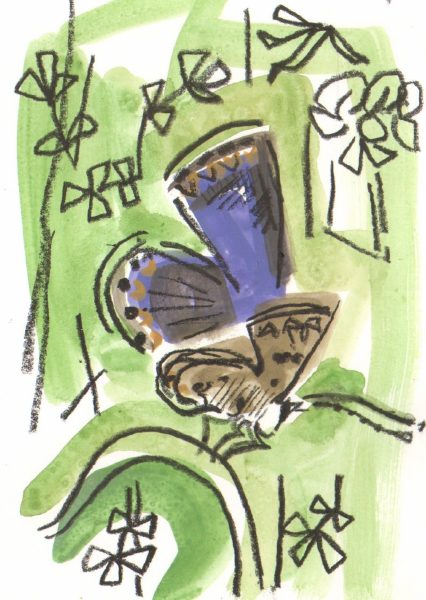 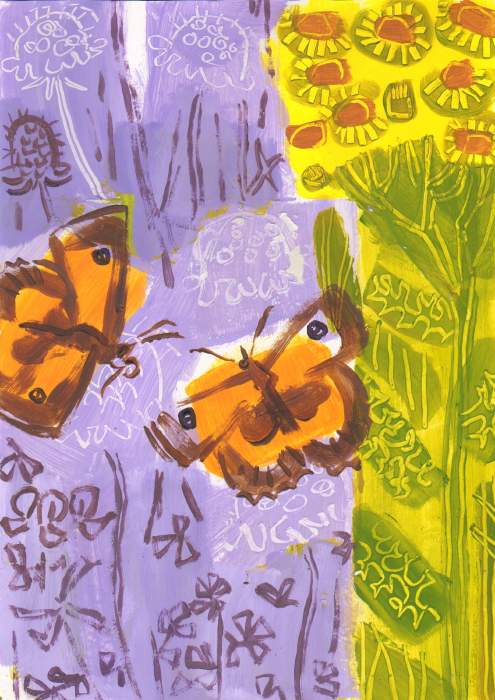 Yesterday working more with acrylics … playing with simplified colour blocks, scratched ‘negative’ lines, brushed ‘positive lines…next up to think more about left white space as a ‘space making’ device.
Meanwhile in more nature nerd mode I couldn’t quite believe that I was watching a brown argus on my micro meadow .. seemed so unlikely. It was one though, a male. Quite often disturbed by a male common blue (the only other blue around)… I made diligent notes and took photos and it is still there a day later. Another Roesel’s bush cricket too. 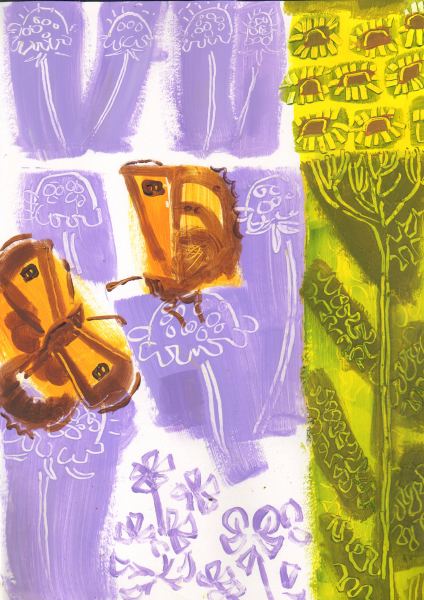 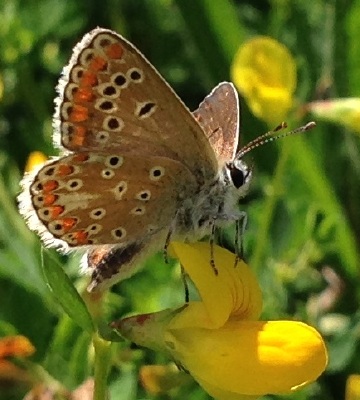 Wanting to get denser imagery + stand back a bit from all the detail… but not wanting to get bogged down with printmaking. So making first efforts with acrylic. 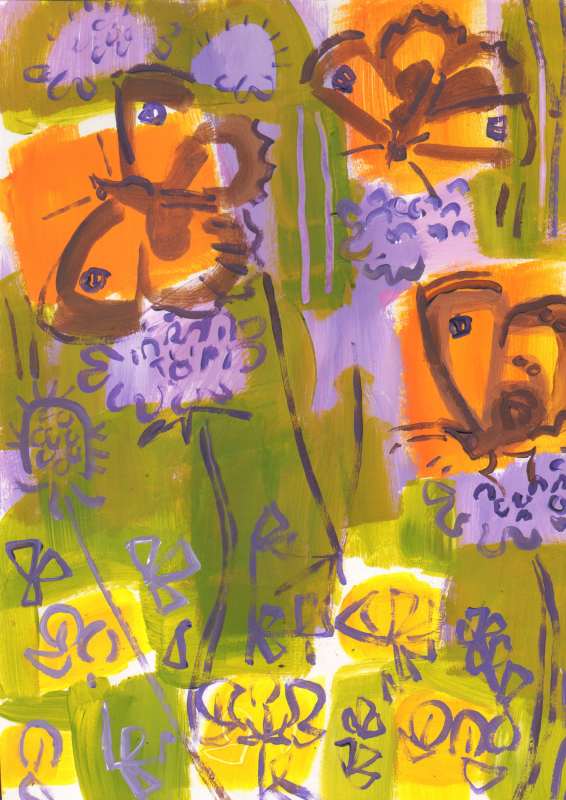 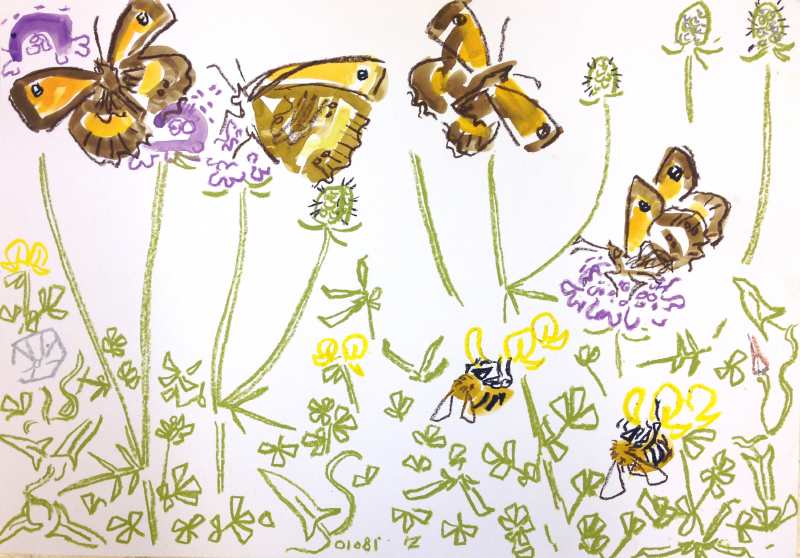 My working method so far on the allotment has been to look for activity that is likely to be repeating itself. I’d like to have tackled the common blues but there seemed to be only one male around… so back to gatekeepers on scabious and then seeing that the common carder bumblebees were coming to the trefoil below. Working on a larger sheet (A2) to see how that felt, wanting to gradually get more expansive.
One of the sad things of watching a fixed space is noticing how the seasons for different species turnover…no more skippers or ringlets for this year (in their adult form)…. 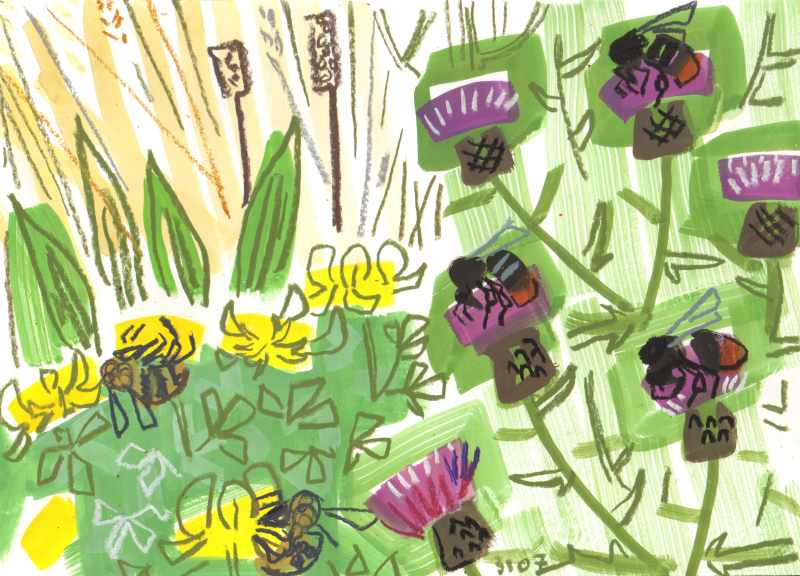 Enjoying plugging away at how to interpret themes just outside the back door. The main study theme for the day was common blue butterflies… I’m really gratified when they stick around… there is now masses of birdsfoot trefoil to keep them happy and i’d like to up the numbers. I really get bogged down drawing them though… getting hung up on detail. Think it may take a while before they can sit alongside the bees in a sketch. The blue on the sketch below hopelessly wrong and remember getting caught out by them this time last year. 2 fairly distinct hoverfly spp. that I’ve yet to look up. 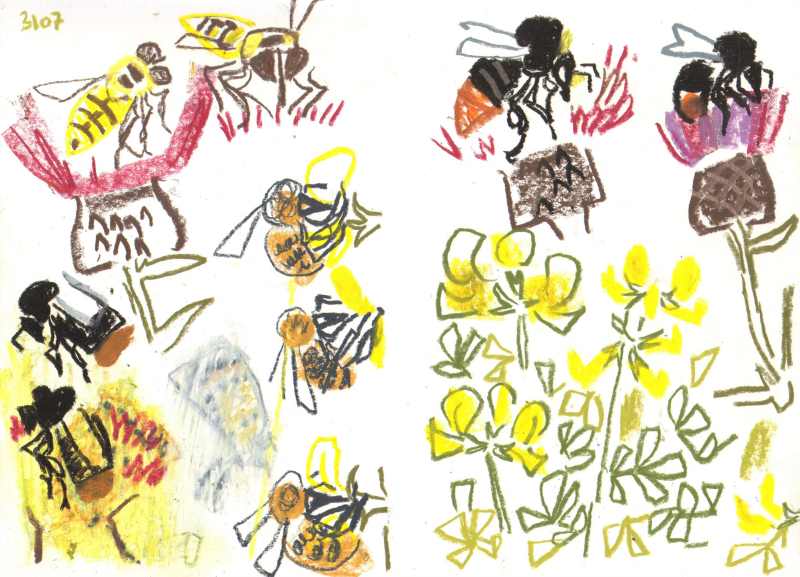 When I was having lunch a sparrowhawk made a lunge at the young great tits that have been creating a carousel effect on the bird table. Flashed in and then momentarily perched unstably on the washing line over my laundry. Sense of it seething/flaring and then off. 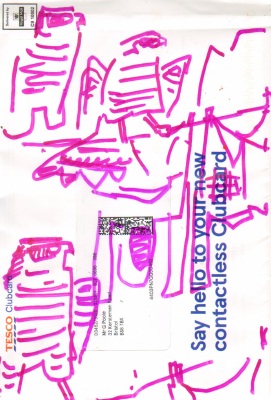 sparrowhawk on the washing line Focusing on knapweed. in the morning I returned to ink pen drawing… filling sheets to explore the details that I felt least sure of… mainly how to capture the bumblebees but there were new species of hoverfly that I hadn’t sketched & I wanted to look more in detail at the character of the knapweed. Easy to make generic patterns that miss new minute observed ‘truths’. After 3 days of poor weather insects out in force, feeding up. More meadow browns but looks like the end of the ringlet season. The straggly knapweed candelabras busy with mainly male red-tailed bumblebees, shoulders and forehead tuft a sherbet lemon.