common blue butterfly  – first seen on 27th may feeding on the cut-leaved cranesbill. (see the yellow rattle post for more about common blues) 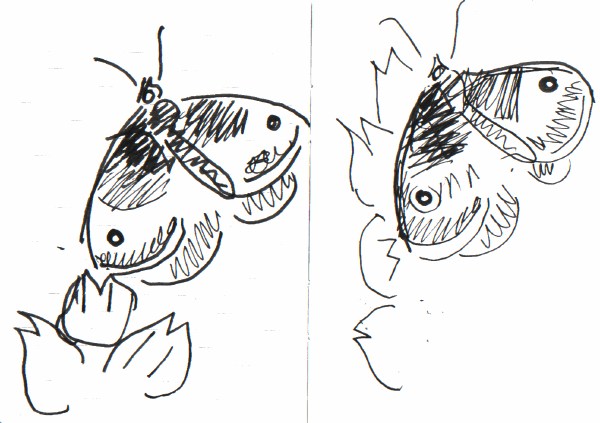 Meadow brown & Ringlet – didn’t keep much record of numbers but I think there were a lot more around than the previous year. First meadow brown on 12th june. first ringlet on 16th june
Gatekeeper – plenty around, I think of them as mainly on brambles and marjoram June/July but no good records of numbers or dates.
Peacock
Small tortoiseshell – steadily more of them around it seems, no caterpillars seen despite our neighbouring nettle beds.  Maybe I need to do some cutting back of nettles to encourage fresh growth which is what I think they like.
Red Admiral – plenty seen but no particular records kept
Comma – seen regularly but no records, usually basking on bare soil.
Large skipper –  on 22/24 june
Small skipper – First seen 12 june.  I don’t think there were as many as previous year… I’d guess at maximum count of 10 or so (but this is just on the 4 x 4 metre mini meadow).. often nectaring or sunning  (or establishing territory?) on ragwort. 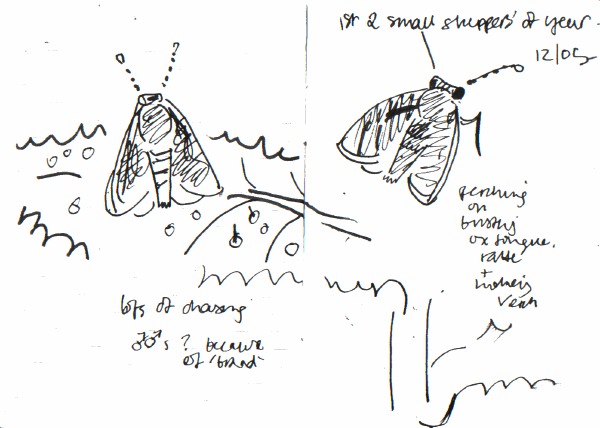 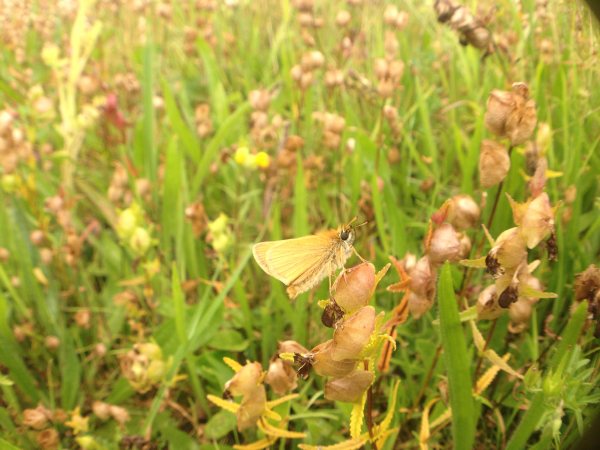 Brimstone – only really noticed in the early days of spring.
Whites – no serious notes made… there is that time in august/september when they seem to floating around like blown paper scraps…
Speckled wood – first of year on 15th april…

Moths –
No moth trapping this year and only really paying any attention to the more showy species.
Seemed like a lot more cinnabar moths including some egg laying on the ragwort. I’ve a note on them for the first time on 14th June… and garden tigers the same day (lots around the 22nd june). We seem to have lots of the tigers … whizzing frenetically around quite high on summer evenings… last year I managed to see one gradually narrow its orbit until it found a female resting on an elder leaf, presumably transmitting pheromones that he was locking on to.
Only one or two burnet moths and no sign of egg laying. 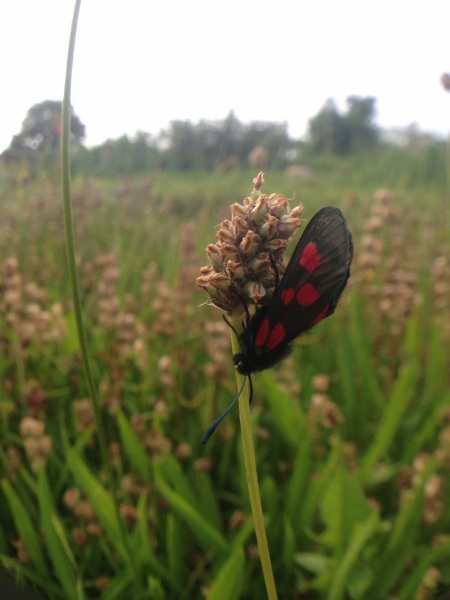 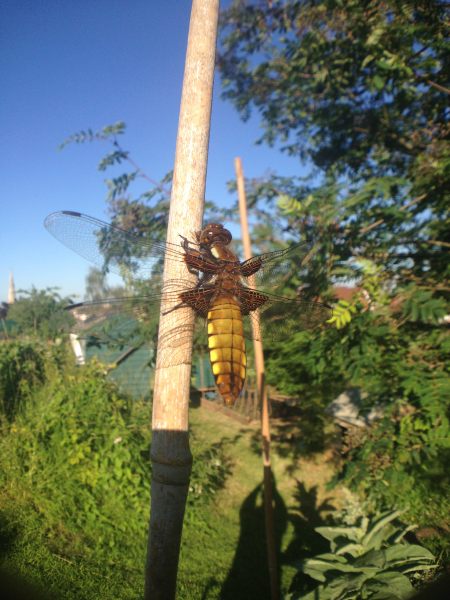 Lots of southern hawkers emerged from the pond along with azure and large red damsels as well as common darters. These don’t really feature on the ‘meadow’. Migrant hawkers  are over the allotments from august (?) on. 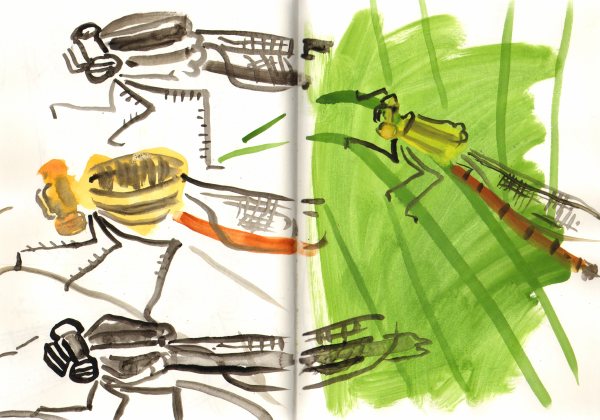 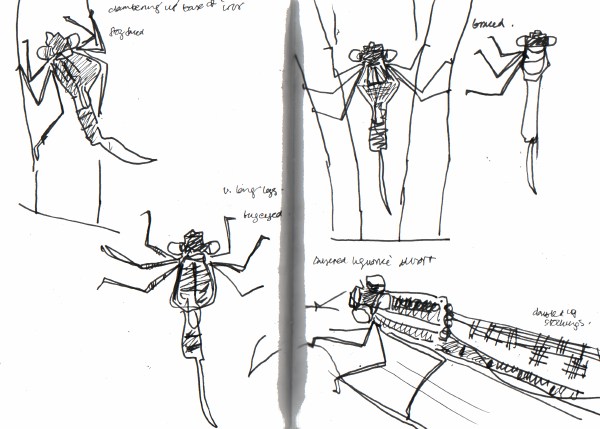 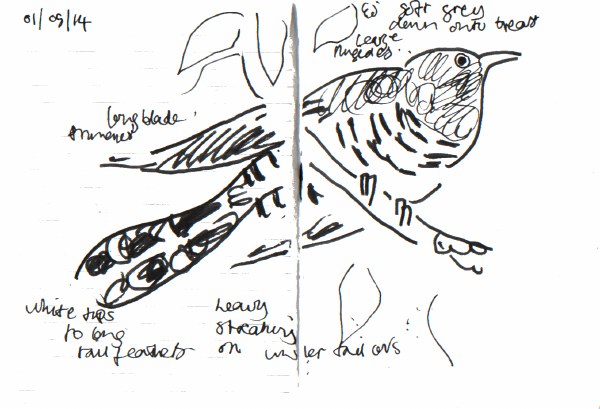 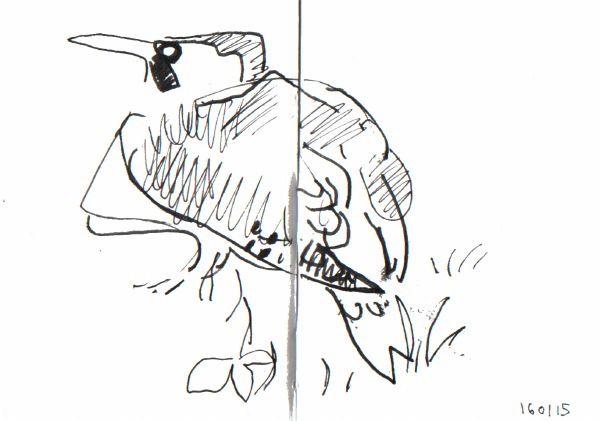 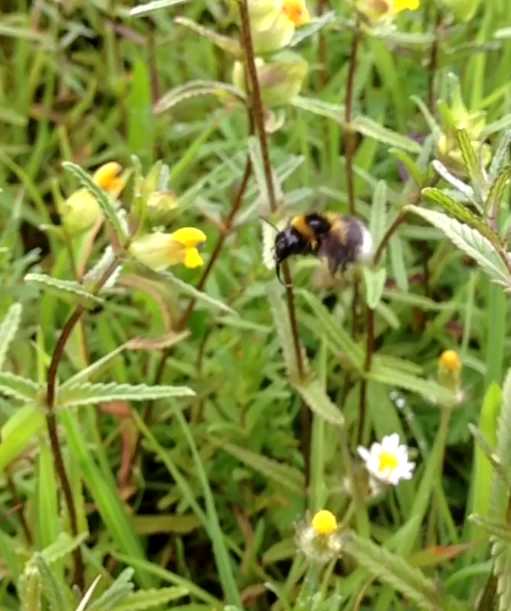 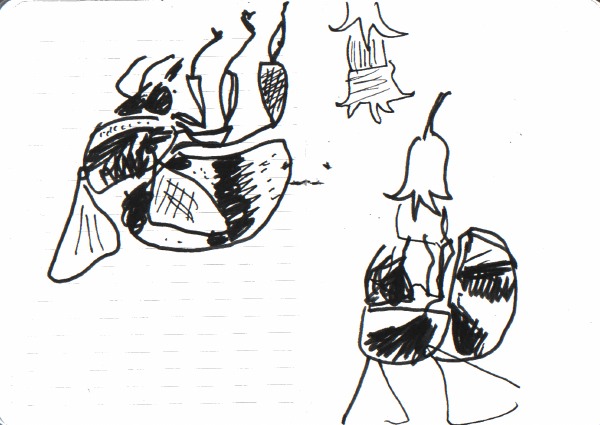 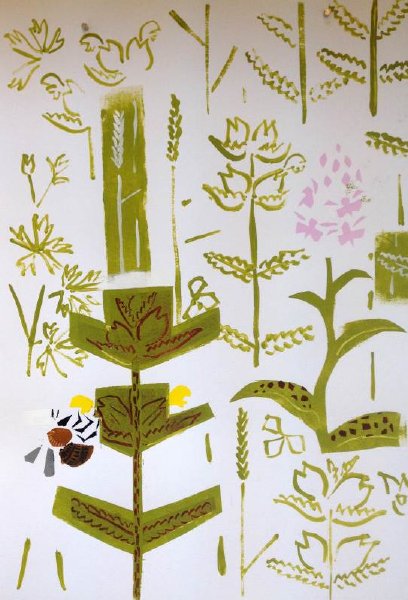 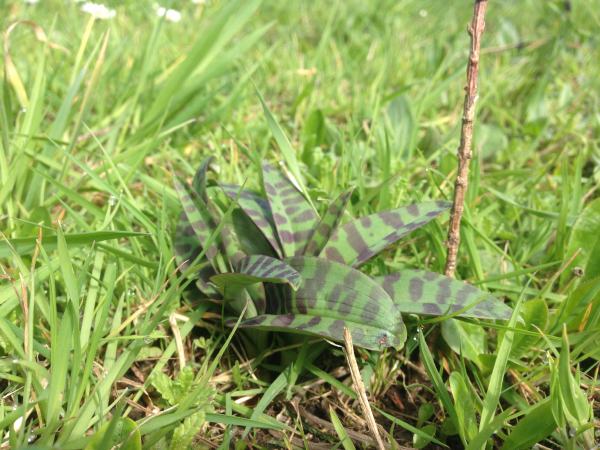 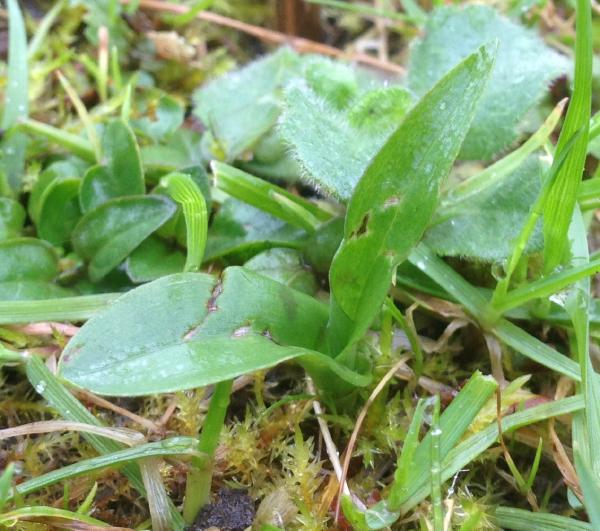 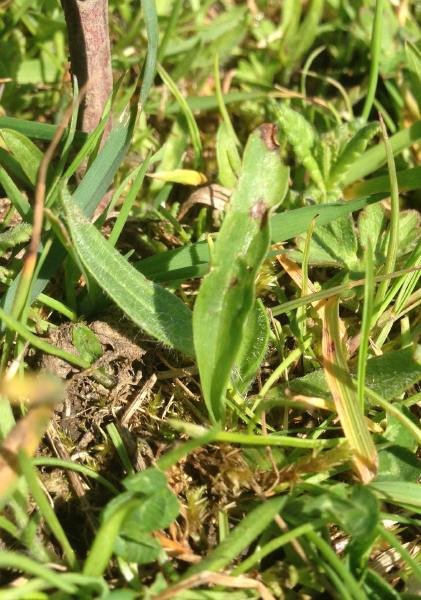 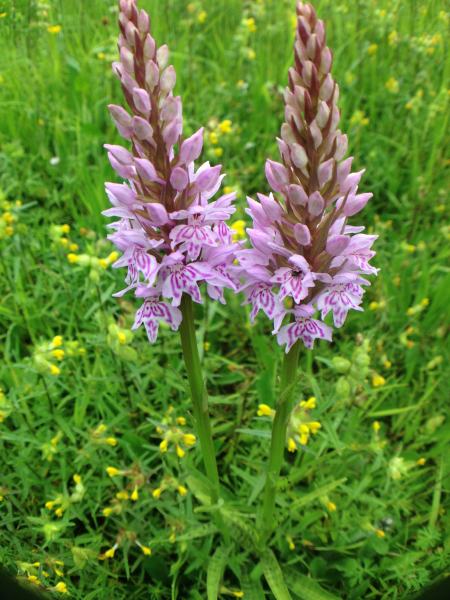 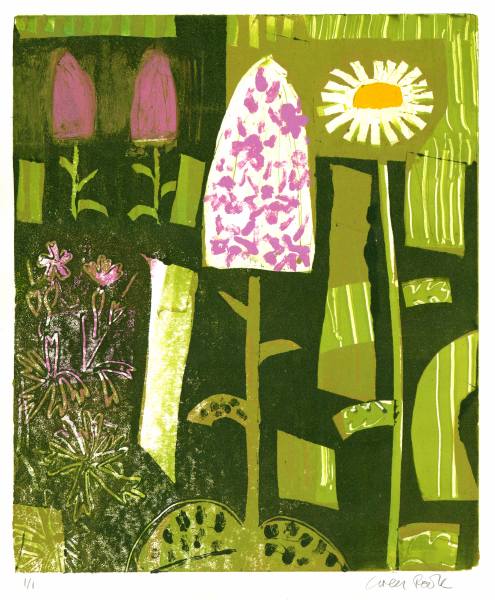 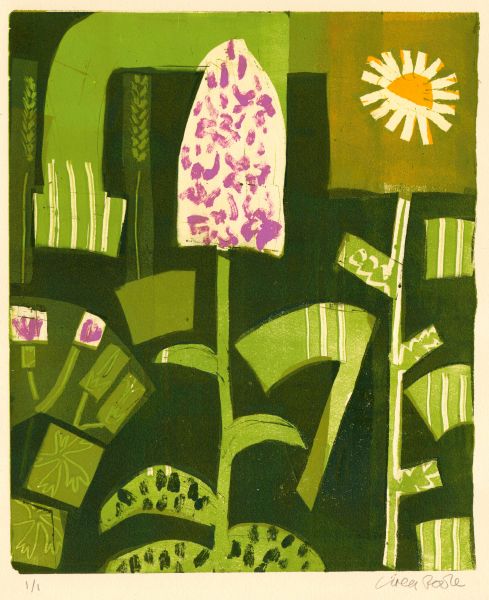 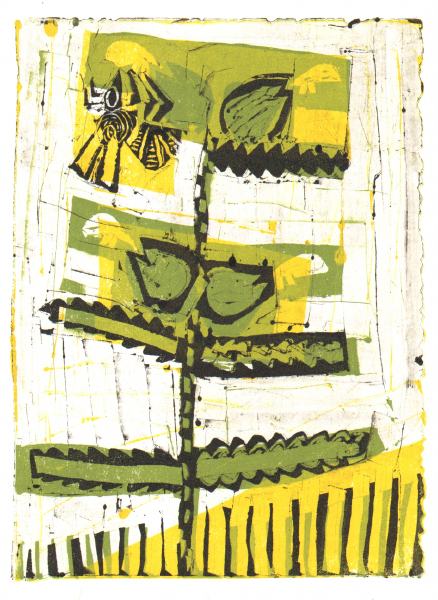 I’m doing a couple of workshops during the annual Society of Wildlife Artists exhibition at the Mall galleries, London.  The first will be assisting Bruce Pearson on a Drypoint course on the 2nd November.

Then on the 9th November a Monoprint course with Kim Atkinson. Drypoint – With Bruce Pearson and Greg Poole
Sunday 2nd November 2014 10.30 am to 4.30 pm
Drypoint is an intaglio printmaking technique where lines and a variety of other marks are incised (scratched) into the surface of a printing plate which is then inked and wiped and an impression taken on dampened paper
Using sharp steel points, sandpaper, glue and carborundum powder to create a range of soft subtle lines, deeper more velvety burred-edged lines, and roughening and changing the texture of the thin plastic plate surface to add tonal variety, we will explore as much as we can of this expressive and exciting drawing medium.
Please bring an idea, a sketchy thought or a drawing to start the creative process on the day, and wearing an apron or old clothes is advisable.  Materials will be supplied, (plates, ink, scrim, paper, drypoint tools).
Cost £POA (including a £POA charge for materials)
8 places available
To book a place please mail
darrenreesart@btinternet.com

Monoprints
with Greg Poole & Kim Atkinson
Sunday 9th November 2014 10.30 am to 4.30 pm
Monoprinting has the essence of most other forms of printmaking. It is about different ways of applying and removing ink from a block (we’ll be using perspex) which is then printed onto paper. We’ll be playing with as many approaches as we can manage in a day. This is hands on and is likely to be a bit messy. An apron, or old clothes advisable.
Limited to only 8 participants. Materials provided. Cost £POA.

Workshops are sponsored by Intaglio printmaker of London

Muchelney pottery have produced a nice looking invitation for upcoming exhibition. If you’d like a hard copy please contact the gallery or me directly … otherwise it would be good to see you there. 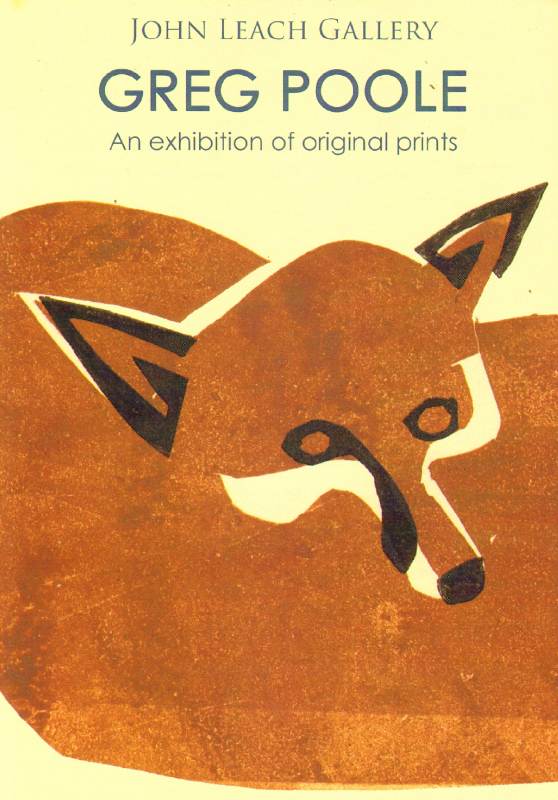