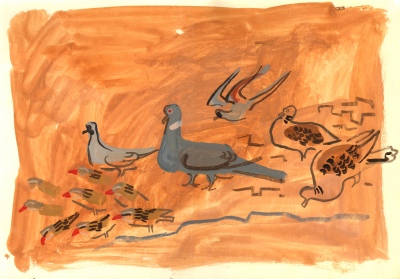 This was the first stage of a British Trust for Ornithology – BTO/Society of Wildlife Artists -SWLA collaboration (see link for overview).  4 artists (Bob Greenhalf, Bruce Pearson, Esther Tyson & me) travelling to Senegal primarily focussing on Western Palearctic migrants on their wintering grounds.
We were guided by Phil Atkinson of the BTO and for the latter part of the trip Dakar based scientist Paul Robinson.

A really intensive couple of weeks, almost non stop sketching. Now that it is done I can better see that what I was trying to do. Building up a repertoire of what surrounded the chiffchaffs in acacia bushes or wheatears feeding around cattle dung in near desert… so that they could then be placed in a bigger picture that might represent their winter quarters.