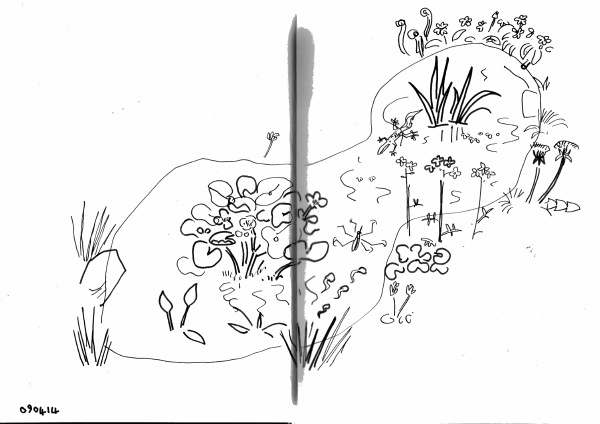 Effort at showing the stage of development of the pond… a snapshot of whats happening in and around the pond in early april… but its one of things a snapshot can’t do…. unless you make a Hockney ‘joiner’. More reason to make the detailed studies so that I can simplify better in attempting the overview.
Components are… soft rush in its new landbound location (used to be in baskets in water).. water plantain having survived the winter is now starting to get its leaves above the surface. Marsh marigold just opening its flowers… tadpoles have now spread over the whole pond (where they had just been in shallow end). Cuckoo flowers and celandines have been flowering for a while. Duckweed multiplying…the shepherds crooks of harts tongue ferns unfurling surrounded by a bed of primroses flowering profusely.
April 9, 2014 Greg Poole
pond-2014