All posts from the Meadow 2013

Really springy days now. I’m keeping a close watch on the small patch of grass on the allotment that I’m cultivating as a mini meadow. The yellow rattle popping up all over… leaves still minute… I like the feeling of improving my search image for these early basal leaves.  As yet the community up there is very limited and some of those basal leaves I’m still unsure about but if I keep watching and sketching they’ll reveal their identity.
Butterflies have been so scarce that the sighting of any individual really catches the eye. Today brimstone,  moving quickly through gardens. Peacocks sunning on bare soil and one feeding on dandelion. A single basking small tortoiseshell and comma. 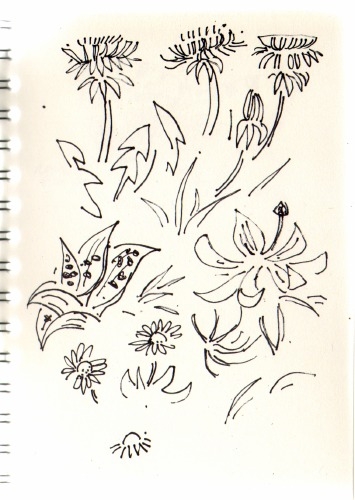 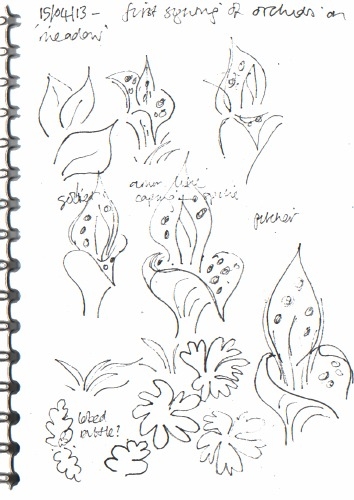 Hopeless at keeping up blog at the moment, or even doing much sketching. I have been gradually updating archives of past work (butterflies almost complete) and that deters me adding to the pile.  Until a week ago I was also relief printing but then lost confidence in it….
The scratchings here were of the common spotted orchids that have reappeared on the patch of grass on the allotment that I have started to try to cultivate as a mini meadow. Only 2 spikes as yet. Last autumn I scalped it and sowed yellow rattle. I’ve been up there searching for signs of germination without success until yesterday… and with the discovery of the orchid leaves I looked even closer and found the minute early leaves of what must be the rattle. Very late to get going, like most things after the arctic spring.
April 16, 2013 Greg Poole
meadow-2013